I’m back in Quito after more than a month on the road circling Ecuador. From Otavalo and Cotacachi in the north to Guayaquil, Zaruma and Loja along the coast and in the south, to a retreat near Cuenca, I’ve met some wonderful sights and seen some interesting people. Or is it the other way around?

Rooming at the SAEX/Quito Clubhouse for the next month, I have set aside this time to review what has transpired and what will come next before I leave this amazing country and move on to Perú. Having 2 months left on my visa I expect to flesh out the 2 big targets on my agenda: the Amazon Basin and the Galapagos Islands.

Through connections here at the Club I am negotiating a trip to the Amazon, most likely from the city of Coca. With a population of about 45,000 people, Coca is the staging point for trips to both the Cuyabeno and the Yasuní Reserves and sits at the confluence of the Coca and Napo rivers.

The Napo is a major tributary of the Amazon River and was the route taken by Francisco de Orellana when the conquistador made his way east as the first person to cross South America from the Pacific to the Atlantic. You might have seen the movie “Aguirre: Wrath of God” (1972) that was an artistic take-off of the expedition. I’m hoping my trip won’t be quite as surreal! And anyway, Brazil’s pretty expensive, so I’ll skip the Atlantic for now.

On the Road to Cuenca

My way back to Quito from Loja included a 12-day retreat near the village of Gualaceo, itself about an hour outside of Cuenca, which I have now visited 4 times. I’d have to say that the road from Loja to Quenca, only a few years old and in beautiful condition, has to be one of the most stunning I have ever traveled, anywhere. Within minutes of leaving Loja the road begins its love affair with the mountains and canyons separating the 2 colonial cities. This twisting route hugs the cliffs along the way and reveals to the traveler wondrous vistas of mountains, rivers and bottom land, often a thousand feet below the pavement. I’d consider visiting Loja again, just to repeat witnessing the drama along the highway that leads there.

After a night in Cuenca I made contact with Javier, the axis of a multi-generational family of taxistas. He drove me and 2 others over another beautiful but rough road to a private 55-acre retreat that we will call Sacred Earth for now. Javier is the person you want to know in Cuenca. He seems to know everyone and every place and will connect each to the other upon request. I enjoyed his company immensely and we’ve since traded several e-mails. We had a great conversation about life on our way to our destination.

I had reserved a spot at this retreat 2 months earlier and I was eagerly looking forward to repeating my spirit world journeys of April/May while visiting the Shuar. But it was not to be. Just because both retreats each held ayahuasca and san pedro ceremonies, just because both use state-registered shamans, and just because both profess a path to the divine, was no assurance that both would, or could for that matter, deliver the same experience. And this turned out to be the case.

In the most charitable of times I might be able, I suppose, to consider the Sacred Earth retreat as a kind of summer camp with ayahuasca. Though we received many pep-talks at Sacred Earth about how we were there for spiritual growth and how Sacred Earth was set up for this “life-transforming” purpose, in fact and in deed this was really not the case. More attention was placed on and directed to Kumbaya-style creature comforts with a little jungle medicine thrown in for authenticity. And very little at that.

In nearly 2 weeks of very comfortable living, we attended 4 ceremonies: 2 each of both ayahuasca and san pedro, with a lot of free days in between. In comparison, during the 18 days I spent with the Shuar, the participants attended 16 ceremonies, 11 of which were natem (ayahuasca in the Shuar language), a san pedro ceremony, and 4 other ceremonies relating to the ayahuasca vine that also provided opportunities for spiritual assessment.

Each of these 2 very different retreats had set participants back about the same in costs on a per diem basis: about $125/day. In comparison this expense is a 1/2-off bargain to what is available at the new age-y retreat extravaganzas in Perú, where you can also get your hair done and your teeth straightened, with maybe some paragliding thrown in too. But what was delivered by these 2 Ecuadorian retreats differed immensely both in quantity and in quality. Surely let the buyer beware.

To The Ceremonial Maloka

Sacred Earth is truly an ayahuasca beginner’s resort and and it’s really rather more an introduction to the Wonders of South American Spirituality. Compared to the Spartan offerings of the Tsunki retreat, this experience was closer to a Club-Med for your summer vacation. I suppose if I had read more closely between the website lines and asked a few more pertinent questions beforehand I could have detected the difference, but Así es la vida, such is life.

What with the 3 full-size hot tubs, a “sauna-ish” room, a media room in the Community Center with an extensive video and music library, wi-fi connectivity and a yoga pavilion, massage and Reiki, we were offered any number of diversions with a high level of creature comfort. Oh, and don’t forget: an ayahuasca ceremony on Tuesday; try not to be late! But don’t fret, because Saturday is a free day and we’ll all hop into vans and go into Cuenca for shopping, ice cream and dinning out at any of the numerous groovy restaurants.

During the Shuar ceremonies each participant had an understanding of reverence for the procedure. I don’t remember it ever being discussed as a rule to follow, but for at least an hour before the beginning of each ceremony, as we singly prepared for what we knew would be a long and difficult night, there was little to no talking since each of us was focused on the intent of being there for our personal journeys into the spirit world. Even as a newcomer I understood that this was a sacred undertaking and by no means a trivial jaunt. Silence and contemplation, like the Zen retreats I attended many years before, was a given and an expectation; you just did it. 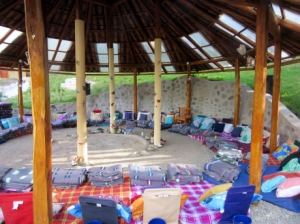 Maloka Ready for a Ceremony

At Sacred Earth however, each lead-up to a ceremony was entirely light-hearted and even when the shaman appeared and began his incantations, his songs and his prayers, the group behaved as if we were taking part in an adult version of a sleep-over; with jokes and silly banter and fluffing the pillows just right; all this sharing was going on back and forth around the circle as the night closed in and the ayahuasca took effect.

I was speechless at such a casual approach to what I’ve previously only understood to be regarded as a deeply religious experience. Yet at Sacred Earth we were assured that all was taken care of and everything would be fine, because the tobacco smokers among us would have the option of a smoke-break part way through the night’s proceedings! Sacred indeed.

In the past few years, as ayahuasca has become quite well-known in the “developed world,” a division has grown between 2 groups seeking out this indigenous medicine. There are those who recognize the power of the vine and its ability potentially transform one’s life. This group believes that through millennia the people of the Amazon developed their protocols based on keen observations and their integration into the natural world around them, and developed the reverence necessary to realize the full potential of this powerful path.

Those who studied these cultures and their approach to the path of self-discovery both accept and welcome the traditional steps necessary for such an experience. As it happened, the majority of the people in my first retreat had been working with the plant for years. A woman from Germany who helped introduce me to protocols during the retreat, believes, by her own calculations, that she has taken ayahuasca about 80 times.

Then there is the other group that I can only regard as tourists: people who add the ayahuasca “experience” to their lists as just another must-do, like storming the disco bars down in the Zona Rosa, like buying the perfect trinket for a new setting on the dining room table. These are the ones who race to South America’s natural wonders, grab a selfie, and move on. Sacred Earth fully caters to this second group and is really nothing more than a beginner’s guide to what’s hot and what’s not in natural medicine south of the Equator. It’s really pretty sad as it lowers the drinking of this important medicine to just another thing to do while on vacation. Wait ‘till we tell the guys back home; I should say.

12 thoughts on “Returning To Quito For Some Basics”