When I herniated 2 discs in my lower spine I immediately lost an inch of height. This was back in 1986 and it came right after losing a vicious fight with a cast iron bathtub. Minutes earlier it was just the 2 of us on a staircase when the body said “No more.” And so did my doctor.

He said that if I continued this insanity then more discs would rupture. I was a licensed plumber at the time. Lifting heavy appliances and bath fixtures was the norm. He predicted that after a while I’d be tightening my belt up around my armpits. Literally, not just figuratively, I’d become a knuckle-dragger.

Maybe not in so many words, but that was his warning. It was time for a change. Thus, along with the bathtub, my 20-year construction career truly came crashing down around me. And it left me even more disproportionate than the way I was born. These days though my bigger inequity is my feet.

At the base of a shrinking body I float on size 13 shoes; kind of a circus clown effect. Or maybe an overgrown Hobbit. Canal boats. Land skis. Anyway, as a result I have lived through any number of embarrassing moments over the years: tripping on some things, kicking (not purposely) other things. In the past 18 months I’ve been getting my feet stuck under the front seats of mini taxis while trying to unfold out of the back seats.

All this podiatric warfare has taken a toll on my shoes. My shoes are the only barrier between my twinkling toes and the foreign elements of travel. For as much as 12 hours a day, virtually every day, I am on my feet. I am wandering and yes, even wondering on city streets, mountain paths, jungle trails, in airport terminals, at ferry landings and within hotel lobbies. I’m in restaurant dining rooms, local markets, museum halls and theater aisles. In the same pair of shoes.

My shoes are a mess. Their terminal fatigue has surpassed permissibility in polite company. I need a new pair, badly. Ah, but not so fast. Size thirteens (or 47’s down here)? Good luck, Gringo.

The majority of people living south of the Equator are not tall. Take last night, at the restaurant. My waitress barely came up to eye level as I was seated. While she, standing there wondering what this foreigner might say, was poised with order pad in hand. And that is generally the case. If you expect a face-off, take a seat.

Certainly there are tall Peruvians, and I saw more than one in Lima. However the majority of them were getting out of their Mercedes’ and sprinting to the air-conditioned tennis club; the upper-class whites. When they go shopping, they hop on a flight to Miami. The folks on the street and out of the capital are built like the waitress and dozens of waitresses like her. It’s no surprise that my needs are not their needs.

If you are shopping for clothes and you’re visiting from up north you can try a tourist-focused mall in one of the major cities. With patience you can paw through the racks and occasionally find something larger than a medium in shirts or slacks. Maybe the color’s not right, and not all styles are represented, nevertheless large and extra-large do exist. But shoes? Get ready for a special treat there, Pluto.

When the time came to replace my shoes it was also for me the beginning of a new career. I had no idea that I was to become the frontman for dozens of aspiring comedians. That was revealed when I entered my first South American shoe store. This was in Ecuador. The owner, who happened to be holding a pair of pliers, offered to cut off my toes. In between fits of doubled-over laughter he swore that he could make me cram into a pair of size 9’s. Ah, Ha ha ha.

The thing is, Ecuadorians are giants compared to the many four-foot-aughts I meet on the streets here in Perú. These folks are tiny! Have I said that before? And they sell shoes to match. Trudging through upscale malls in Lima, in Cusco, and finally here in Arequipa I meet with an equal mix of mirth and chagrin at each shop. But we all have a great time and I’m happy to say that I have made the day for many a bored shoe vendor. Shock and awe, but in a novel way.

Because you see in South America it’s not like with Donald Trump. He and Marco Rubio went at it over hand-size, somehow equating such with masculine development. Here, guess what? They whole-heartedly equate the same (and truly believe it) with shoe-size!

My Spanish is getting pretty good, though when spoken rapid-fire I still miss a lot. What I don’t miss though, are the wide-eyes and red faces of the women clerks at shoe stores. Ah, the traveling life.

I was recounting my most recent shopping disappointment to the owner of my hostal, Juan Carlos. He stopped me right then and there. “Kaaal,” he said. (German names are not easy for Spanish speakers) “It’s time to rejoice!”

He knew the solution to my shame. It was found just a half-dozen blocks from La Casa de Sillar where I am staying. His single mother has a torrid yet chaste affair (South America is conservative you know) going on with José and Juan Carlos explained that I had to go see him. José would save me.

Don José is a zapatero, an old-school shoemaker. I found his workshop just before sunset and at the same time I also met the master himself. He had just pedaled up to the curb on a well-maintained Trek mountain bike. Returning from a 3 hour siesta, he was energized and ready for business. Doña Gloria, Juan Carlos’s mother, had warned him to be on the lookout for the gringo, so he wasn’t surprised to see me. We hit it off immediately. 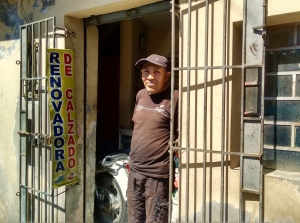 Don José, with his motocicleta in the background.

I had complemented him on the bicycle racing posters plastered on his walls. I also mentioned that after retiring from the university I became a bicycle mechanic. That did it. Our friendship was cemented for good.

José competes in his age group (he’s 47) in both road races and on mountain trails. He also rides motorcycles. He had both a road machine and an enduro along with his Trek crammed into the 4’ x 12’ workspace. The shop was lit by a single dangling lightbulb. This place was more than packed: it was floor-to-ceiling jammed. 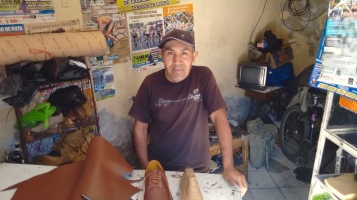 One of my battleships is on the counter.

But he found me a foot-high stool and had me hunker down for measurements. As we sat, soon joined by his friend Charles, we spent the next 2-1/2 hours reviewing each other’s lives and dreams. The time flew by. Part way through our talks, José showed me some of his current projects.

He was re-soling a pair of trainers for Doña Gloria, a labor of love to be sure. Plus, he was putting finishing touches on a largish pair of what seemed to be dancing slippers. This elegant footwear in black leather, covered with decorative metal studs, was a custom pair he was crafting for the neighborhood transvestite. I know that this person will like them because they also have shiny metal inserts that wrap around the heels. The inserts match the studs. Fancy is as fancy does.

These shoes of hers say a lot about life in South America. Yes, the countries are conservative. Yes, both the Catholic Church and the political systems condemn the life we generally take for granted in the US. Though back home it’s not that extreme opposites in lifestyles often associate with each other. Nonetheless, our legal system does protect our differences. Except for North Carolina, but that story’s for someone else’s telling.

In contrast, life on the street in Latin America is a working model for “Don’t Ask, Don’t Tell.” As long as you’re not harming anyone, as long as you’re not pestering others with your personal dramas, people here know how to get along. Even when lifestyles and needs are not openly admitted to. I knew that these studded beauties were sure to please.

“We don’t have much, but we’ve got each other,” are the words to live by in these parts. I’m very comfortable with this. And I know that Andelina (her working-gurl name) will be comfortable with her shoes as well. 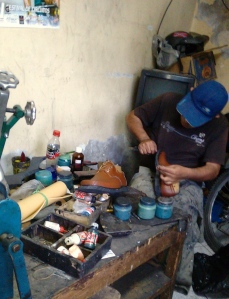 José attending to my Sole

OK, My feet are measured: lengthwise, widthwise, outlined, multiple circumferences noted. I’ve picked out the color: a medium brown; the style: a sober, semi-dress walking shoe. In one week I will have my first hand made pair of zapatos (shoes). They should go well with the new pair of navy wool trousers and gray sports coat I picked out earlier this week.

I’m getting ready for Chile. The people there are living with the most vigorous economic climate in South America. They dress accordingly. I’m tired of looking like a tourist. Or, as another waitress opined to me, a mendigo, a beggar. But she exaggerates: the poor people here dress better than the rich gringos from up north.

For the curious, these shoes have set me back a full forty-five dollars. Sure, that’s a lot of money for custom-made full leather shoes, but this is Perú. That’s how things are done here.

Postscript: It’s a week later, I’m a couple of twenties thinner, and I’m sitting in a restaurant wearing my new kicks. They’re a few hours old but already they feel like old friends. José built in some amazing cushioning (both in the soles and the interiors) and I’m ready for some long days walking south in a skinny country. Prepare yourself, Chile: I’m on my way. 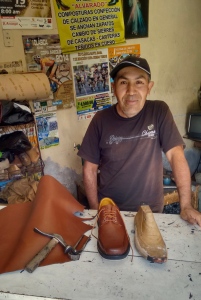