Comfortably into my 2nd week here in Otavalo and I’m at somewhat of a crossroads. I could easily stay here, even while Inti-Raymi is winding down. Though today is the official end, more festivities go on until Friday, and then there are 3 “spill-over” religious rites that last until early July. 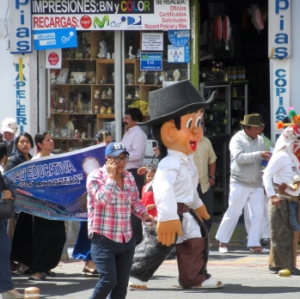 Tomorrow, with my senior discount 20¢ fare, I plan to visit Cotacachi via a 30-minute bus ride. This small village, known around Ecuador and beyond as the Nirvana of leather goods, it is also home to a growing number of expats. Sue, one of the guests at Hostal Curiñan is one of them.

She and her husband are “mule farmers” in Alberta and are also homeowners in Cotacachi. They have just sold their original home in the pueblo and are in the midst of constructing their 2nd one. Sue is a true expat in that she speaks a passable Spanish and knows how to always have a backup plan.

Plan B is critical for when the plumber doesn’t show up as promised, or her Ecuadorian lawyer disappears at a critical junction in her property negotiations. Or worse yet, when he asks for double the original fee for handling the legal papers. Not only does Sue have a Plan B, but she plugs it in with a laugh and a smile.

Ruth blew in and blew out of the hostal this past weekend. A retired physics professor somewhere north of age 70, this New Zealander has been a solo traveler for decades and she taught me a thing or 2 about bargaining with alpaca weavings vendors, traveling light, and converting inches to centimeters on the fly. We had a great (but frigid) boat ride on Cuicocha Lake the day after she bought me a pitcher of tomate de arbol (tree tomato) juice for my birthday.

Judy Goldberg is another one of the Hostal Curiñan clientele crew. She and I share acquaintances in Santa Fe that go back more than 20 years, though the 2 of us had never met when I lived there. She and her husband have lived in New Mexico for more than 40 years and she’s in Otavalo for the next stage of her anthropology grant. A professional videographer, Judy is interviewing Matilde and José Miguel for the 2nd year running and she recounted to me a bit of the extraordinary lives that brought them together and that they are even now living as the hosts of this wonderful inn.

Years ago Judy created a non-profit in Santa Fe that is now very alive and healthy. As time moves one she wants to pass it on to others as she grows her Ecuadorian projects.  In addition to recording the Hostal owners, she is also making audio recordings of a family split apart during the Ecuadorian diaspora. I had no idea that the 4th largest Ecuadorian city is NYC! I do now. Now that she’s interviewing the brother of a New York Ecuadorian radio-show host. The brother lives here in Otavalo. Where else?

Judy was having some issues with language subtleties during a few of the interviews, so Marcela stepped in to help. A young Chileña psychologist, beautifully fluent in English, she had the room next to Judy at the Hostal. Marcela is here buying medicinal herbs to use with her curandera during an upcoming San Pedro (mescaline) ceremony. She felt comfortable revealing this after I recounted my own Natem experiences from last month.

Marcela, even while directing a UNICEF program on a farm outside Santiago, is a fellow traveler in the spirit world. She and Judy, José Miguel and Joselito, and I all journeyed to Peguché at midnight on Monday to enter the waterfall for a ritual New Year’s bath.

We all swapped e-mail addresses and my pals: synchronicity and serendipity, being what they are we may well and we may easily cross paths sooner or later. But the hostal is quiet today. Sue and I are the only ones left and she’s headed back to Alberta tomorrow.

Yet even as she’ll be hopping buses back to Quito’s airport, the Hostal is set up to greet a dozen new faces scheduled to arrive on the same day, some for the night and some for longer terms. Among them will most certainly be some worth knowing. Hostal Curiñan and the loving people who own and operate it attract guests who also bring with them this energy and this love. Should I go or should I stay? I’ll have to answer that question at some other time. Right now, more people are dancing in the street outside the restaurant, and I’m going out to watch